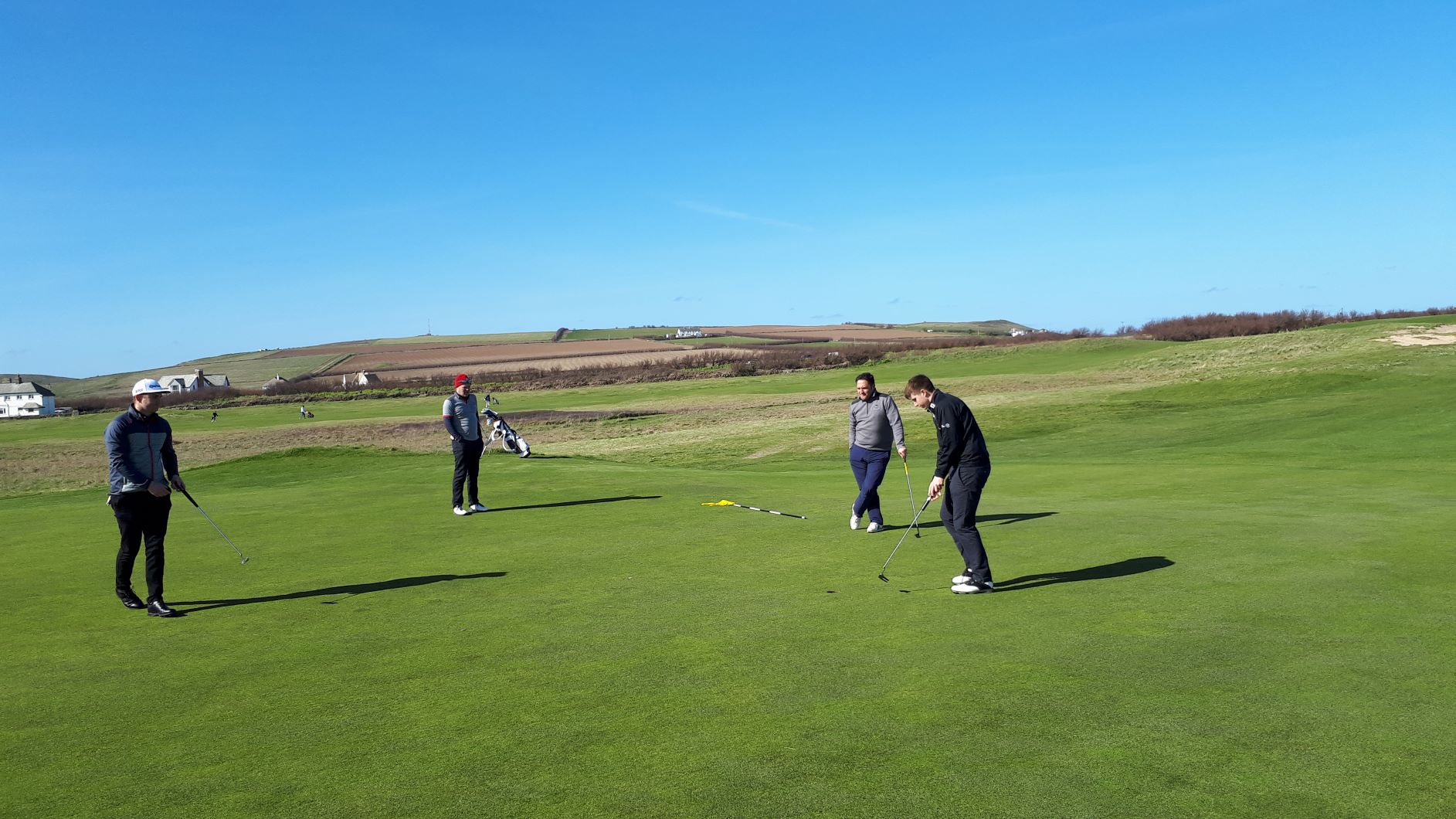 It was the Cornish Professional golfers who claimed the bragging rights in a match versus the Duchy Mens Team at Trevose G&CC last Sunday running out 4-2 winners and reminding their amateur counterparts there is work to do. It is hoped the fixture, set up by County Captain Ian Veale and Newquay based Professional Chris Gill, will become an annual event at the start of the season and it proved to be a very beneficial workout with some excellent golf played by both sides.

Despite a cooling breeze out of the North-East it was a clear blue sky and sunshine that greeted the teams Trevose Golf Club.

Matt Richards (WCGC) and George Leigh (Trevose) would lead the line for Cornwall against the experienced pairing of Phil Brookes (The Point) and Nick Rogers (Falmouth). The Cornwall pairing built an early lead, 2 up through 6 holes, and it was a lead that they wouldn't relinquish as they eventually signed off with a 4&3 victory. 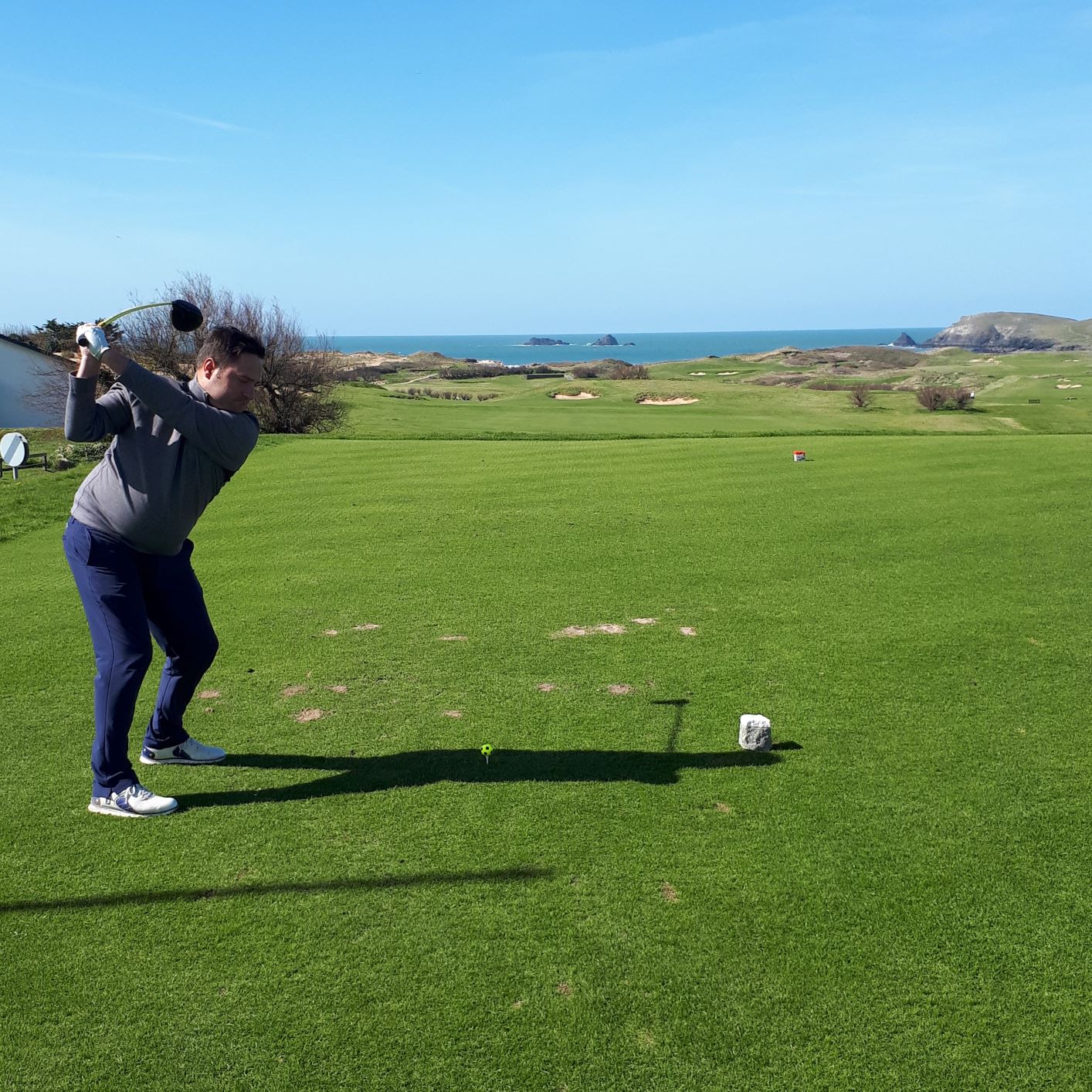 The Pro's Captain (pictured above on the 1st Tee) would feature in the second match, partnered by James Taylor, also of Newquay Golf Club, with their opposition being Aaron Stephens (Newquay) & Joe Reynard (Trevose). Never was there more than a hole in this game, with the lead switching hands throughout the afternoon. Reaching the 17th green with the game all square Gill had a makeable putt to take a one-hole lead into the 18th hole but it would stay above ground. To the 18th and with Stephens making a conceded par, Taylor stood over a putt of 30 feet for birdie whilst his partner was just five feet away after his approach shot. Two chances, and it would only require one as Taylor slotted his putt for a one-hole win which would square up the overall match.

Sibling rivalry dominated the third match as Ryan Curtis (Bude & North Cornwall) and Jon Hancock (Newquay) took on Adam Curtis (Bude Professional) and 'guest' Pro Josh Greenaway, playing against his old team-mates having recently retired from the amateur county golf scene. As with the second game there was nothing to separate the pairings until Adam holed a birdie putt of 30 feet on the 17th green to claim a one-hole lead playing the last. With all four players making par at the 18th it was now the Pro's who took the lead in the overall match.

Sandy Kirton & Jack Mewton (both Perranporth) would be charged with restoring parity, and they would achieve this in fine fashion against the pairing of Ian Ashenden (unattached) and Jack Venn (Boringdon). In the better-ball format Kirton & Mewton played the first five holes in 5 under par to command a four-hole lead, and by the time the match reached the 14th hole the lead was five holes, which was how it would finish with the amateur pair securing a 5&4 victory.

With the match score now standing at two games a-piece the match would be settled by the outcome of Rob MacGregor (Tehidy Park) & Conor Wilson (Perranporth) playing against ex team-mate Joe Cruse (St. Enodoc) & Joe Venn (Tehidy Park). Venn made the solitary par on the first hole to establish a lead that would never be given up as Cruse proceeded to make eagles on the 4th, 6th and 7th holes!    MacGregor & Wilson rallied, reducing the deficit to two-holes playing the 14th, with both amateurs holing putts for birdie on the 14th before Cruse calmly rolled home his own birdie putt to maintain the two-hole lead which would remain in place at the conclusion of the 17th hole for a 2&1 victory and an overall 3 - 2 winning score-line for the Professionals.

A sixth game took place between four of the county squad with Steve Davies & Craig Thomas (both Trevose) assigned to the Pro's team against Mark Grootz (Trevose) and Kieran Faulkner (Looe) for the amateurs. This game would also go the distance, with the players reaching the 18th green all square. First Grootz from 25 feet for a birdie which despite being on line was a couple of rolls short before Thomas converted his own attempt from 20 feet for a one-hole victory to increase the Pro's margin of victory.

Veale extended the thanks of the Cornwall Golf Union and the professionals to Nick Gammon (Trevose MD) for the use of the facilities and announced that together with his Vice-Captain, Charlie Phillips the teams for the Royal Navy match (6 April) and opening Channel League encounter against defending champions Gloucester (7 April), both to be played at West Cornwall, will be selected in the coming days.

Veale said afterwards " The match was played with a great team spirit on both sides. There was good banter around the fixture but equally it was plain to see from where Charlie (Phillips) and I were standing that no quarter was given and that it was fiercely competed. The Pro's turned us over ! Well done to them and maybe the result has put us on notice that there is work to be done with the season directly around the corner."

England Golf Membership Campaign - 'Give It A Shot'